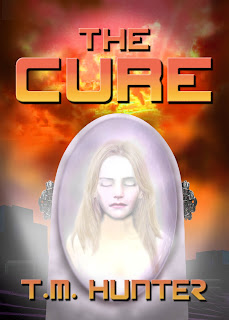 Sweltering heat followed Mila as she entered. Second-guessing her morning wardrobe decision, at least her dark suit jacket covered up her sweating skin.

A reception desk sat off to her left. Mila didn’t recognize the cheerful young woman behind it, which set her hackles up. The baby-faced redhead sat with a nail file, grinding like a mad woman as she chomped just as hard on chewing gum. Bouncing curls atop her head flowed down to her breasts which burst forth from her low-cut black top. She looked up at Mila and flashed a brilliant smile.

“Where’s Barbara?” The regular receptionist would have taken Mila right away to where her family waited. She’d been through this same process daily, step-for-step over the last three seasons, coming up on ten months now. Every lunch break, like clockwork. No one knew outside of this building. Not the people she worked with, not even her relatives. Nothing good could come from too many people being aware of her activities.

“Called in sick this morning, so I was told. I’m from the temp agency.”

“Mila Groso,” she muttered. “I have an appointment.”

The young woman motioned. “Please have a seat.”

Mila turned toward several plush white chairs along the opposite wall. “That’s really not necessary...”

The busty redhead put on the fakest smile Mila had ever seen. “Oh, it’s no bother.”

Frowning, Mila could do nothing but follow the woman’s instructions. The young temp dropped her file and picked up a small cylindrical transmitter, squeezing the sides to pop the handset open. A communication link was established with a dual-tone beep. She held her hand up to muffle her voice. Without any background noise, though, Mila still heard every word. “Mister Docken, there’s a Mila Groso here. She claims to have an appointment, but nothing’s listed.”

Listening to the response, her face grew serious before closing the transmitter again. Without a care, she flashed another fake smile. “He’ll be out soon.” Barely a moment passed before she’d gone back to her nail file.

Mila pursed her lips and squirmed, unable to find a comfortable position in the chair. She looked around, seeing peaceful digital artwork by artists with names she didn’t recognize. The distinct stench of fresh paint spilled off the walls. They’d gone to great lengths to liven up the facilities over the past few months. There was no sense in it. Putting a friendly, pleasant face on the surroundings didn’t hide the fact there was only one reason to come here.

To visit the dead.

Down a second hallway, a door lock clicked open, drawing Mila’s attention. A tall, gaunt man in a freshly pressed white dress shirt, black trousers and tie stepped into view. Relief worked its way onto Mila’s face at the sight of someone she finally recognized.

“Mila,” he said, drawing close, “sorry to keep you waiting. Your regular viewing room is ready.”

She stood and smoothed out her dress pants, taking the high road by forgiving the utter inconvenience she’d been put through. “Thank you, Paul.”

His smooth black hair caught the light from above while he gave off a weak smile. “You’re welcome.”
The pair walked along the corridor, the only sound coming from Mila’s heels striking the faux wood floor. They passed through an ornate doorway into a rectangular waiting area. Waist-high leafy plants stood in each corner.

Once they were out of earshot, Paul mumbled to Mila. “Sorry about that. It was a big surprise finding out Barbara wouldn’t be in this morning.”

It really wasn’t her concern, but Mila still figured an inquiry appropriate. “Is she okay?”

“Her niece called this morning. Apparently, she came down with something nasty.” He glanced toward the lobby. “I hope she comes back soon. It’s hard to find good help.”

Mila nodded absently. She’d always been able to find excellent employees and had never needed temporary help. With this experience, she counted it a good thing.

Paul held a hand out toward another pair of plush white couches. Mila figured the facility had bought in bulk. “I’ll just double-check everything’s as you’ve requested.” He left her there, entering the central of the three viewing rooms while she sat down once more.

Such frequent visits weren’t in the standard burial contract, and had been negotiated for a significant price. Calling it a request was putting a definite spin on things.

Mila’s limbs shook, just as with every visit. Even being strong-willed as she made herself out to be, the entire situation still struck unbridled fear into her bones. A death sentence carried out on her family’s murderers had not appeased her bloodlust.

Neither had it assuaged her guilt.

She composed herself as the door opened and Paul stepped out. A cold chill flowed out to greet her. “Take as much time as you need.”

“Thank you,” Mila mumbled, walking inside.

“I’ll be up front whenever you’re finished.” Paul shut the door behind her.

She took a deep breath and stared at the two sarcophagi. The standard white coffin had been upgraded with ornate markings and shiny metal carvings mounted to each corner and around the base. It had been billed as a flowing pattern meant to speed the decedent’s path to the afterlife, or some other such nonsense meant to soothe a survivor’s grief. Dark purple blankets hid wheeled carts which rested under each casket. These provided the means for Paul’s staff to roll them inside the viewing rooms. She’d only heard stories of the underground storage vaults where so many dead were held, having no desire to see them.

All citizens of this planet were buried in sealed caskets, preventing decomposition as was the Vetrasian custom. Mila still recalled the interment service held in this very room. Outside the building had been so dreary and rainy, an unlikely circumstance for the then-summer season, but matching Mila’s emotional state at the time.

Silence closed in from all sides. Despite the center’s use of floral sprays as a mask, there was no way to completely eliminate the musty stench emanating from the underground vaults. She shifted up to the caskets, her shaking hands creeping toward the transparent shells. Every visit confirmed what she knew, but couldn’t accept. It hadn’t been a bad dream. Her family was truly gone forever.

Even now, she wasn’t convinced. She’d be with them soon enough. That was the only thing providing her solace, letting her sleep at night.

Looking through the clear lid at her daughter was almost as if gazing into a mirror of the past, her foolish youth. This teen’s face, though, was a model of steadiness, framed by the same thick, dirty blonde, shoulder-length strands Mila herself was burdened with. A long white dress was the standard burial garment for all the planet’s women.

“Oh, sweet Oreana...” Mila choked on her words, and streams of tears flowed down her face.

She wiped her eyes and turned to the second casket, where her husband’s tanned face sat in wait atop a white suit, the standard men’s burial garment. She longed to once more run her hand through his brown ratty hair, to stare into his sky blue eyes. “Gordon, my love,” she whispered. Stroking the hard plastic cover with her fingers, Mila tried to remember what he felt like. It made her sob even more that she couldn’t recall the memory.

She looked upon both bodies, as always marveling she couldn’t make out the slash marks and stab wounds they’d received from their killers. Paul and his staff had done a fantastic job, but even without visible reminders, she couldn’t clear the bloody images from her mind. There was no silencing their final screams of agony and terror which echoed within her mind.

Mila closed her eyes and the tears gushed forth. She should have arrived on time that fateful night. If she had, they wouldn’t have been waiting in the parking lot when a pair of vagabond killers had found them. Random as it had been, her family ended up dead, because she always put work ahead of everything else in her life.

With a sigh, she eased her eyelids open, blinking away tears and glancing back and forth between the corpses. A small smile formed while the liquid train slowed. Increasing hope filled her heart, knowing she had a plan, even though formed from grief and desperation. With every passing moment, Mila knew without a doubt she was getting closer to the cure she’d been seeking these last ten months.

The cure for death.