Currently attempting to meet my July goals. Had a pretty decent week this time. Here's the recap:

Currently attempting to meet my July goals. Missed last week's recap due to other responsibilities, so this one will cover two week's worth of output. Here's the recap:

Now, my goals for the coming week:
1. Write 1500 words on my sci-fi suspense/mystery novel.

Stormrunner is now officially released for the Kindle, and is available over at Amazon.

Go ahead and check out this excerpt. 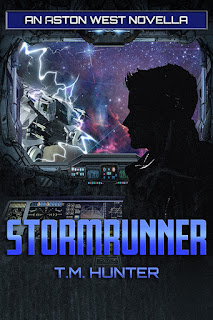 Life tends to throw you for a loop when you least expect it. Unfortunately, it sometimes throws me for a loop, even when I expect it all the time.

I was staring at the long-range navigational charts on my side console screens, and kicking myself for not scoping out the details of this job before I took it. That was the trouble with consistently having a cash flow problem, that you tend not to be choosy.

If I had actually done some homework first, I would have noticed the fact there was only one direct path from my last stop to my next, Rubicon. Giant areas of plasma storms called the Tycho fields stagnated between here and there, making it impassable as far as a direct route goes. Someone finally built a transport with technology that could navigate through the expanse, making it a bit more feasible. The only way to get to Rubicon was to circumnavigate the Tycho fields until you reached the planet from the other direction, which meant a huge delay in arrival, and likely a huge cut in my pay, if I even received any at all.

Given the minimal cash I always had, I probably would have taken the job anyway, even without the transport.

Jeanie, my ship’s computer, broke my concentration. “The orbital station is transmitting an automated message.”

A female voice announced in broken, mechanical-like diction, “Next scheduled departure is imminent. All vessels wishing to traverse the Tycho fields should make contact with the comptroller to arrange for payment.”

I asked Jeanie, even though I already knew the answer, “And you’re sure we’re not better off going around it?”

“Travel on the transport is slightly cheaper than the fuel burn required for circumnavigation of the storms. You will not make much profit with this job, either way. But the on-time arrival will at least help build goodwill with the client.”

Then I looked over toward the station sitting just this side of the phenomena’s edge. The round, spherical structure was fairly non-descript, with its shiny silver outer hull. For what it was worth, it was dwarfed by the actual transport ship resting nearby.

The vessel seemed like it may have been modified from an old Ursulan freighter, with its squashed hexagon form, and the large spherical dome on top of the forward end of the ship where the bridge would have been located. It didn’t seem to have a full complement of cargo bay doors along the entire length of the ship, though, and had several curved, blade-like appendages mounted all over the outer hull. It wouldn’t win any beauty contests anytime soon, but if it did its job of getting through the expanse in one piece, it didn’t need to be pretty.

The mechanical female voice returned. “Aston West, you and your vessel are now approved for passage through the Tycho fields. Please proceed to the transport vessel. Arrival information has been transmitted to your navigation computer.”

Jeanie alerted me, “Information is loaded. Proceeding to the transport vessel.”

We altered course a bit to the right, where I focused instead on the plasma storm field itself. It was rather hard to see anything out there, but if you strained your eyes, you could make out a large blurring of the stars, as if there were thin clouds of gas in the way. Every so often, I would see streams of light zigzag in the blur.

“Doesn’t seem all that impressive to me. Sure we couldn’t have just made a run for it?”

Jeanie was matter-of-fact, as always. “Those small light streams you see are powerful charges transmitting within the phenomenon. When metallic structures, such as ships, pass through, they attract the charges and end up severely damaged as a result, if not destroyed.”

I leaned back in my chair, admitting defeat to myself. But then, I wondered aloud, “So how do they take a huge ship like that through?”

“They keep the technology tightly guarded, to prevent other ships from learning how to traverse the phenomenon by themselves.”

It seemed wrong on so many levels, but I probably would have done the same thing. Cash flow is king in the depths of space.

We continued toward the transport, as one of the side panels lifted and opened wide for us. Jeanie did her usual expert job of taking us in, giving me a brief glimpse into the landing bay just before we rotated back around and drifted backward between two similar-sized vessels already docked inside.

My landing skids touched down gracefully, and the outer door closed while another automated message came through. “All travelers shall remain on their vessels until the transport vessel enters the Tycho fields, at which point an all-clear message will be provided and permission to move about the ship granted. Anyone found violating this order shall be required to leave the transport vessel and all monies shall be forfeited. Anyone who resists shall be subject to deadly force.”

“I do not believe they are exaggerating,” Jeanie told me. “Individuals in pressure suits are standing guard at various spots in the hangar, including all exits, armed with automatic burst rifles.”

Suddenly I wasn’t sure this was the greatest idea.


Buy a Copy From These Stores:

Currently attempting to meet my July goals. A real struggle this past week. Here's the recap:

Well, it's been six months since I first started working toward my writing goals. Things were still a bit weak this month.

So, here are the results for June:

1. Complete 3,000 words on Before the Dawn. - Didn't get anything written on this goal this month.

3. Complete 3,000 words on my sci-fi suspense/mystery novel. - Didn't get anything written on this goal this month.

4. Write 2,500 words on a new Aston West short story (other than "Toll Road"). This will require 625 words per week, which should be able to be completed in a single day. - Didn't get anything written on this goal this month.

1. Complete 3,000 words on Before the Dawn. This will require 750 words per week, or a little over 250 words per day, writing three days per week. Setting a goal this next week of 750 words.

3. Complete 3,000 words on my sci-fi suspense/mystery novel. This will require 750 words per week, or 250 words per day if I write three days per week. Setting a goal this next week of 750 words.

4. Write 2,500 words on a new Aston West short story. This will require 625 words per week, which should be able to be completed in a single day. Setting a goal of coming up with a short story plot and writing 625 words this next week.
Posted by T. M. Hunter at 9:55 PM No comments: