SFFS: Another Snippet from THE CURE

Well, after a week off to take care of my table at ConQuest, I'm back in the saddle for another week of Science Fiction Fantasy Saturday posting. I will, however, mention that because of some impending surgery (Friday), I may be a bit slow getting around to all of the other posts to leave comments. To keep things in line with my previous post, I'm pulling another snippet from my standalone novel, The Cure..

Last week, we were playing with zombie mice. This week, Mila is confronted by a pair of Guardians, religious zealots on her planet, who've come to provide a "warning" to her.

She looked around for anything to aid in her defense. These two hadn’t just come to give her a warning. If they’d not meant to harm her, they could have just phoned in their warning.

“You need to end your research.”

“I don’t know what you’re talking about. My cures save lives.”

The woman laughed. “Don’t be coy. We know all about Project Genesis.”

She’d known these people were here for it, but the fact they mentioned it by name still shocked her.


Unfortunately, it seems that "secret" projects haven't stayed secret...and maybe, if you're all good, I'll continue this snippet where it left off next week. In the meantime, you could read the entire book, by picking up your own copy of  The Cure. Be sure to go check out the rest of the Science Fiction Fantasy Saturday snippets. And again, I'd be remiss in not letting my legions of Aston fans know that although this is a standalone novel, it does come into play with a future Aston novel. So stay tuned!
Posted by T. M. Hunter at 10:00 PM 14 comments:

This past weekend, I attended ConQuest 44 in Kansas City. This is my third year at the event, and the first I've been on a few panels. This was, however, the first year at its new location, across the highway from The K (home stadium of the Royals). I enjoyed the hotel, though I think that its integrated water park may have been the source of severe mold problems in certain areas of the hotel.

All in all, I had a great time. Attendance seemed to be up this year (most likely due to the presence of Game of Thrones author George R R Martin) over last, about double. Panels were interesting, ranging from a discussion of world building to one on anti-heroes (like good ol' Aston). I also had a reading with my dealer room tablemate, Patrick Stutzman (pictured below). Attendance was a bit low at this reading, but I've actually had fewer folks show for other readings I've done, so...

I do believe Martin's attendance (though not listed as a guest of honor, surprisingly) boosted the attendance, which helped sales, but a few other notes:

- Series help sales when you make repeat apperances. I had several sales where people remembered me from previous years, had purchased my first book (or my first and second), enjoyed them and wanted to buy the rest.

- People like free stuff more than a sales pitch. When talking up my books, I'm usually a good judge of when people aren't interested. However, this year I had the added benefit of having Seeker available for free most everywhere. When I gave out bookmarks for this one, and informed them of it being free, attitudes certainly changed. Time will tell whether this leads to sales of my other books, but I think it's a good start (and can only be better than having a person leave the table with no inclination toward checking out my work).

- The curse of the introvert. I tend to be introverted, but have conditioned myself to be able to talk with people one-on-one when it comes to selling my books. Panels, however, are still a frightening experience for me. I did have some good points, but I constantly had to think through what I was going to say, which had one moderator calling on me because he thought they were skipping over me. At one point, I think I may have sparked some fire in the crowd, though, because one of my comments tended to get some rather vehement responses...but one of the folks involved came by and bought a book, so guess it wasn't a problem.

- Ensure a sufficient supply of books on hand. Patrick actually sold out of his first book in his series, and still had some of the second book remaining (which with a series, is difficult to do). Myself, I did have just enough of my series novels (the first and second books nearly selling out), but I did end up selling out of The Cure before the end of the convention.

Like I said, I enjoyed my time this year, and am looking forward to attending next year. My next event is only in a couple of weeks, up in Emporia, Kansas. I've made sure to order some extra copies of the necessary titles, so here's hoping that I'll be able to build on the success here, and sell out of everything then as well.
Posted by T. M. Hunter at 6:50 PM 4 comments:

Don't mind me...just posting these here so that I have a way to show someone
Posted by T. M. Hunter at 8:58 PM 2 comments:

SFFS: A Snippet from THE CURE

I apologize upfront for being so lax in my Science Fiction Fantasy Saturday posting...what's it been, almost a month now? Well, amidst all of my posts about my free Aston giveaways (Seeker and my first Triple-Shot), it almost seems like I'm a one-trick pony, stuck on all things Aston West. Now you may not think this is a problem (and bless you if you fall in this category...), but for those who like a little variety, I also have a standalone novel, The Cure, which I'm going to be providing a snippet from today.

The premise of The Cure is simple...A scientist (Mila Groso) watched her family get murdered, and has decided to bring them back to life at any cost. Unfortunately, she has no idea how much it may cost her in the end. So, to set up this scene, Mila has just been informed that her team has something special to show her from their testing (of dead rodents).


Mila drew close to the chamber wall, watching as the small animal came to a standstill. Her team had overestimated her potential for being impressed at this. “Just looks like involuntary muscle spasms.”

She grimaced at this waste of her time, but held her tongue and did as he said.
Without warning, the mouse stood on its haunches, eyes wide, whiskers twitching. Mila let out a joyful squeal.

“Zombie mouse.” Rachel laughed as the rodent stumbled across the chamber on two legs. “How cool is that?”


Sadly, ten sentences barely seems enough, but it will have to suffice for this week. Enjoy the snippet? Pick up a copy of the full book...and be sure to go check out the rest of the Science Fiction Fantasy Saturday snippets. And of course, I'd be remiss in not letting my legions of Aston fans know that although this is a standalone novel, it does come into play with a future Aston novel. So stay tuned!

Also, be sure to check out my other novels and novellas.Or even better, buy a copy of all my books (and those of folks I know) from Amazon through the promotion board to the right...
Posted by T. M. Hunter at 10:00 PM 11 comments:

Well, just received an e-mail from the folks over at All Romance E-Books, notifying me that my novella Seeker has reached best-seller status. Interesting to me, as it's not truly a romance in the modern sense of the word, but I'll still take it. And if you're on ARE, and haven't yet picked up a copy, then click the images below. 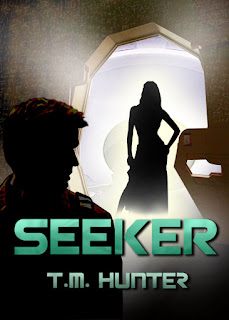