Sorry for the lack of posts for the past several weeks...but on the plus side, things have been moving quite well on the fiction writing front (more so than the rest of life, but that's another batch of stories entirely). Here's how I did against my June goals:

And now, the goals for July:

Here's to everyone striving to accomplish their writing goals for 2014!
Posted by T. M. Hunter at 9:37 PM No comments:


I was tagged by J.C. Cassels at Gotta Name my Blog to talk about my main character. Those who've followed me long enough probably know most of the information below, but it's always good to have a bit of a refresher for the long-time fans and a brief introduction for those who haven't yet met Aston.

1. What is the name of your main character? Is she fictional or an historical person?

Aston West, space pirate extraordinaire (technically, a scavenger pirate, or as it's been referred to in the past, a galactic garbage collector). Aston is completely fictional, as much as he'd like to believe that he's real. But who knows? He may show up on my doorstep any day now and give me a quick kick in the junk for all the trouble I've put him through over the years.

2. When and where is the story set?

Aston doesn't have just one story, but a series of stories and novels. All of these take place across great spans of planets and solar systems in a distant galaxy. While it's unknown for certain whether these all take place in the past, present or future, my personal opinion is that it's a present-day set of tales, all far away from here.

For the sake of giving out more individual information on this question, I'll take my next novel (working title Resurrection). This one spans across three different planets and two different starships (one of which being Aston's new ship to replace the one that met its demise at the end of Death Brings Victory).

3. What should we know about him?

Aston tries to act tough, a symptom of his career choices and his upbringing as one of three orphan brothers. But really, he has a noble sense of right and wrong that he tries to enact through his own brand of vigilante justice when it's necessary. And of course, the most important thing to remember about Aston is that he constantly gets tossed into a mess of trouble. This doesn't end up being too much fun for him, but it's a lot of fun to read along as he tries to get himself out of it all.

4. What is the main conflict?

It varies from story to story, and the novels too. Sometimes, it can be Aston versus old enemies (or old friends). Sometimes, Aston's main conflict is internal. Sometimes, there's a mix of both. In Resurrection, the main conflict is that Aston's old nemesis Elijah Cassus has returned with some nasty surprises in store. But one of those surprises causes both an internal struggle for Aston (how far will he follow Elijah to get his absolution?) as well as an external struggle (with a recently formed relationship).

5. What is the personal goal of the character?

Most times, it's just to get out of the trouble that he's found himself in, and to try and scrape out a living with his scavenging (or his illegal activities). Within the scope of the novels, his goals often get altered or combined, depending on the circumstances.

For Resurrection, Aston's goal originally starts out that he wants to save someone he failed to save before. Along the way, though, he has to figure out a way to right the wrongs he's set in motion.

6. What is the significance of the title of your book?

I try to come up with titles that fit either the story or the novel's main premise. For the novels, I've been attempting to come up with catchy three-word titles (something I'll have to work on for the fourth installment currently in work). As far as any special significance, there isn't any that I know of.

Resurrection is just a title that depicts the main topic behind the plot. I have a feeling I'll need to make it catchier.

7. When can we expect the book to be published?

I have several novels and stories already published (check out the Novels and Collections links at the top of the blog). My hope is that I can get another novella and short story collection published later this year. Resurrection may be out late this year, but I'm guessing that we'll probably see it next year.

Next up is T. K. Toppin. Be sure to check her out. Also, click back, too, to see what characters came before. Thanks for reading!
Posted by T. M. Hunter at 6:20 PM No comments:

So, today was the 8th annual Author Extravaganza, hosted by the wonderful folks at Town Crier Bookstore up in Emporia, Kansas. I think this is something like the 5th time (according to my last recap back in 2012) I've been in attendance. Overall, it's always a good time, and Town Crier has always been good to independent authors in regards to stocking copies of your books after the signing and such. 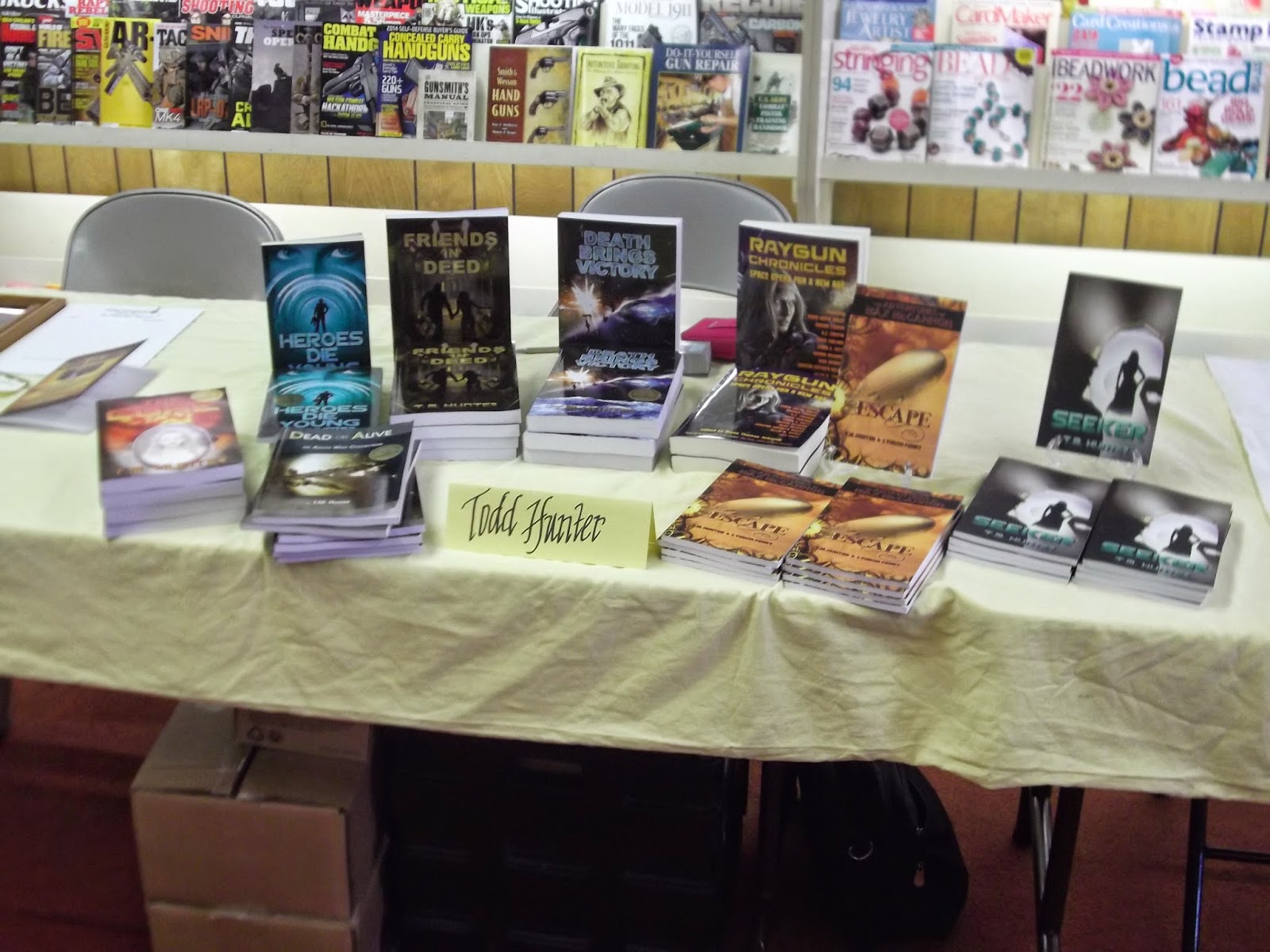 So, if I could actually get my pictures to post you'd see a lot of authors join this event. It can make things quite exciting, talking with your fellow authors (and catching up with those who you've seen in past years). But having so many different authors does help in bringing additional customers into the store, which can help you sell your books as well (as long as they don't come in only for that book and then leave the store immediately).


That said, sold four books (two of which were remaining from last year's event), and the store elected to pick up copies of my two novellas. So, all in all, it was an okay event (especially since it looked like most folks were struggling to get a single sale) and I look forward to returning next year.

Running a bit behind on posting the monthly goals, unfortunately. I did get a bit of work completed,
so there's at least that. Here's how I did against my May goals:


Rather than write a separate post for the weekly goals, I'll just remark that those 500 words above were written this past week.


And now, the goals for June:

Here's to everyone striving to accomplish their writing goals for 2014!
Posted by T. M. Hunter at 9:27 PM No comments:

Hard to believe it's been another six months since my most recent sales update in December, but I do have some updated numbers. So, here goes:

Heroes Die Young has sold a total of 467 sales (print and e-book total), which means 25 copies have sold since December (for a total of just over 4 copies a month over the past six months). This compares to 16 copies sold in the June 2013 - December 2013 range, so sales are a bit up. The six-year anniversary for this one is coming up in September, so we're still dropping well below the average of 100 copies per year.

Friends in Deed recently went into self-published status after I terminated the contract I had. I discovered some discrepancies in my past tabulations (silly spreadsheet formulas) that have since been corrected. In future sales updates, I'll just stick with the total across both versions. As this is a new change, though, I'll list them separately as well. The previous version sold 112 copies (I assume all sales have already been accounted for, but we'll see), and the new version (out since February) has sold 13, for a total of 125 copies (print and e-book total), which means that 25 copies have sold since December (which also includes some of those self-accounting issues on the original version). This compares to around 4 copies during the previous reporting period. January marked the four-year anniversary of this one, so the average is around 30 copies per year. I will mention that my sales of the original version for all of 2013 (counting royalty statements in 2013 and 2014) were 9 copies, and the new version has sold 13 copies in the course of about four months. New cover and a lower price...I think we have a future blog post in the works...

Seeker has gone back into sales mode, and has also become a print title. So, going back to the June 2013 sales update (the last time I recorded paid sales), both versions have now sold 92 copies (print and e-book), so only 8 copies have sold since the last update (compared to 5 copies during that June update), although the change-over to paid happened around the last month or two. December was the 3-year anniversary for this novel, which means we're on track for an average of around 30 copies per year).

Dead or Alive has sold 98 copies, which means 15 copies have sold since last June (for a total of just over 1 copy a month over the past twelve months), since I hadn't yet received reporting at the December update. This title came out in February 2011, which means that we're seeing an average of about 30 copies a year.

The Cure has now sold 107 total copies (print and e-book total), so 14 copies have sold since my past update, compared to 10 copies during the previous update. This book has been out nearly 3 years (the anniversary is in July), so I'm seeing a around 35 copies per year.

Death Brings Victory was released two years ago this past March, and 64 total copies have sold, meaning 4 copies have sold since the last update, compared to 12 copies during the previous update. This puts it on track with most of my other novels, at just around 30 copies per year. Although sales are down considerably in this six-month stretch, I'm hopeful that all of the sales this year of Friends in Deed will lead to future sales of this title.

My newest title is my collaboration with Lyndon Perry, Escape. I would put in the cover, but my web browser isn't playing nice with Blogger at the moment. This title was just coming out in December as I gave my previous update. I haven't gotten an update from Lyndon on all of his sales, but counting the last numbers I had from him and including my own personal sales, 14 copies have sold, for an average of about 2 copies per month.

Now for the analysis of this latest period:

Since my latest update (December, except as noted above), I've sold 114 books compared to 79  books during the previous update for an average of just under 20 books per month.

And so I have a statistic when people ask (and quite often they do), the latest "total sales" number now stands at 1053 copies (counting all titles).

If we put together the last twelve months of sales (not counting Seeker, which just went back into the paid sales column, nor Escape which has only been out a few months), I see the following:

So, until next time, enjoy the statistics, and good sales to us all!

Thanks for stopping by!
Posted by T. M. Hunter at 8:06 PM No comments: