For those who don't often follow my tweets and fan page postings, I was up in Emporia, KS this past Saturday for their annual Author Extravaganza (this is my third straight year). For those not familiar with the event, it brings together a multitude of Kansas (and surrounding area) authors for a group signing.

The shop who hosts the event, Town Crier, is a bit on the smaller side, so it can tend to be an extremely cozy event. This year was no different, with a projected 51 authors in attendance. Tucked in elbow to elbow is always an experience, but you get used to after a while. 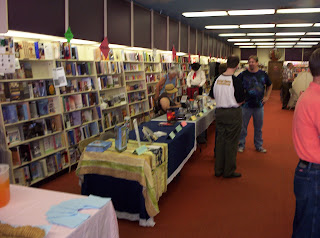 Overall, I thought it was a decent event. Sold more than I had in several recent outings, and Town Crier always seems to pick up at least one signed copy of each book for stocking on their shelves. I did notice that this year, they reduced the quantity of extra copies they purchased, which may be a sign of things to come in the future.

Some takeaways I had from this event:
Again, I thought it was a successful event, and can't wait for next year.
Posted by T. M. Hunter at 4:55 PM