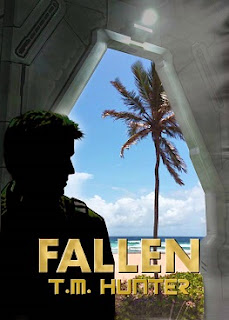 I’d always had poor timing. So much so, that it didn’t surprise me anymore when things go wrong. Sitting before a communication beacon in the middle of nowhere, way off any normal transport route, I almost expected I’d have an unexpected visitor drop in. And sure enough, I wasn’t disappointed when a white flash filled my viewscreen.

The other vessel had all the looks of a pirate ship, with the blast-marked hull plating and barely operational lighting. But there was no reason anyone would try to set up a trap for unsuspecting victims here. This was a brand new communications beacon location, so most wouldn’t bother traveling here, not unless they were lost, or trying to steer clear of regular routes as I was. And if this ship was in fact trying to rob me, they would be sorely disappointed by the fact I had nothing in my cargo hold.

“No incoming transmissions?” I asked my ship’s computer, Jeanie.

“Nothing,” she confirmed. “The other vessel is approaching its listed weapons range.”

I had to assume that they were indeed pirates, and not very bright ones, for sure. “I’d better let them have the bad news.”

I sat up a little straighter in my captain’s chair. “Whoever you are, I have no cargo.”

Still no response. I watched the ship approach and had a gut feeling to run screaming at me. Just before I tasked Jeanie to set an escape route and take us to hyperspeed, a window finally opened at the left side of my forward viewscreen.

And it was at that very moment I realized poor timing and horrid decision-making skills had nothing to do with this encounter.

I’d thought I’d seen the last of those demonic eyes, pure and haunting blue lenses that filled both sockets. Even across the vast amount of space between us, I could almost imagine the stench of his breath as he spoke. His gravelly voice morphed into a snarl. “Miss me?”

“How’d you get out? You were arrested.”

I quickly scanned the entire image of the other bridge. Two grungy males who barely looked old enough to be called men sat at a pair of forward control consoles. The rest of the room was empty, aside from Ro himself.

But this wasn’t the time or place for a reunion. “Jeanie, get us out of here!” I called out in a panic.

She mimicked my tone. “Hyperspeed system is offline. It appears to be a jamming signal.”

My opponent feigned a hurt look, sticking out a pouty, gnawed lip for emphasis. “You don’t want to hang out and play?” Then, he jumped up from his chair and pointed a long, fungus-infested nail at me. “Too bad, dead man!” And to his crew, he yelled, “Fire all available weapons!”