Well, another week since I recapped my January goals, so here's the latest weekly recap:
1. Write 1,800 words on Resurrection - Completed with 1850 words
2. Complete a final edit on Fallen - Not completed.
3. Write 2,000 words on the new short story. - Only completed about 500 words. Renamed story "Just Rewards"

Next week, I'll recap my weekly goals and report my results. Be sure to stay tuned in the next few days for my January recap and setting up new goals for February.
Posted by T. M. Hunter at 9:01 PM No comments:

As I'm sure you're all aware, I do have a facebook fan page for everything Aston West Universe-related. But of course, Facebook is out to make money, so they continually change things to make it so people promoting on their service have to shell out advertising money. Needless to say, I don't earn enough in royalties to make that happen, so I'm here to show you a way to make sure you're always in-the-know about the latest Aston West news on Facebook.

First, you'll need to add my page to an Interest List. Go to my page, and click the small gear. Select the "Add to Interest Lists" option. 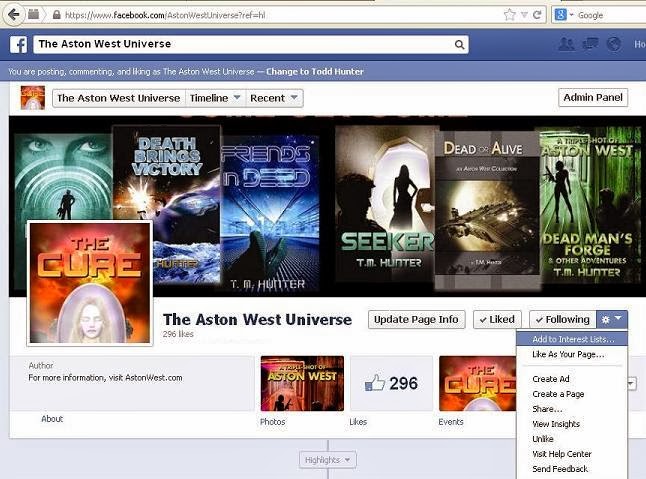 If you're like me, and haven't bothered creating an interest list before, you'll need to create a new one ("New List"). If you're already experienced with these, just add me to one of your existing lists. 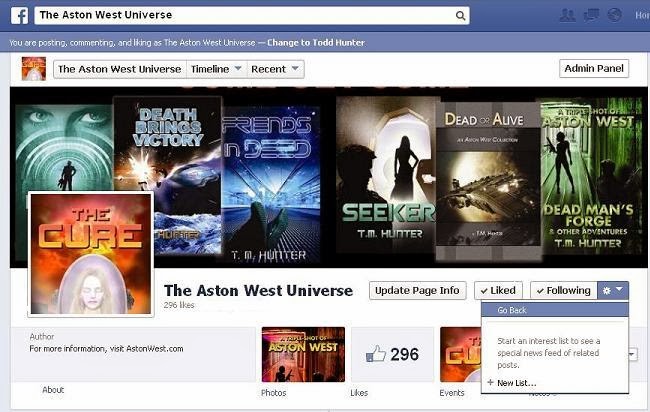 If you're creating a new list, go ahead and just select "Next" from here. 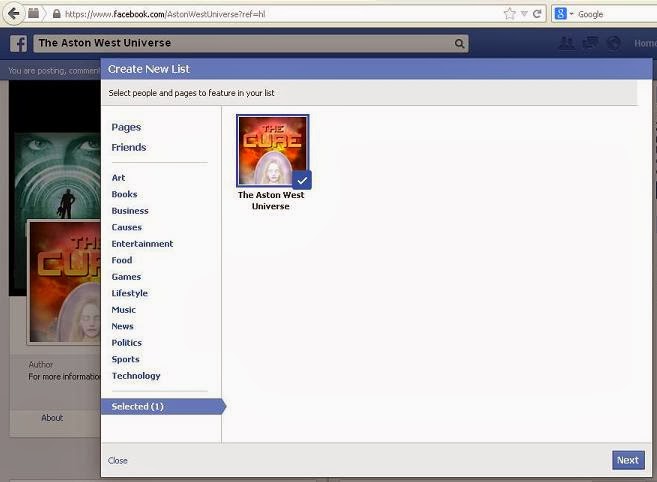 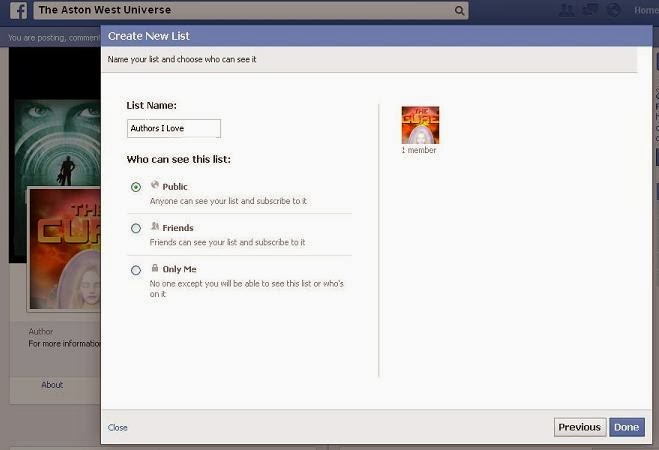 From your news feed, you should be able to scroll down to the bottom of the LH side and see all of your Interest Lists. Select your new one, and you can read all of my latest news (and any other pages you want to add to the list). 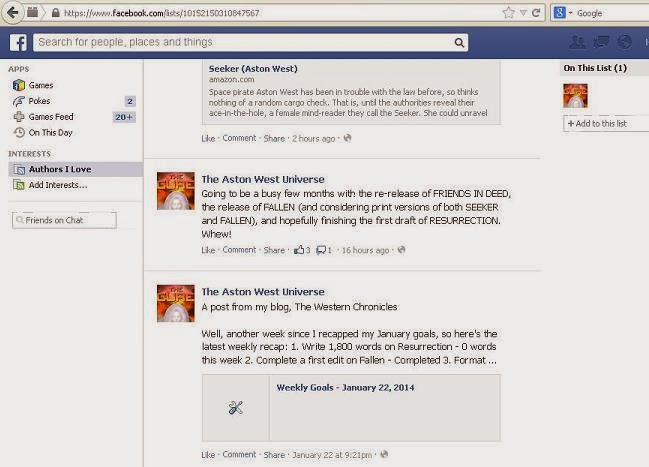 Hopefully this should help you keep up with all of the latest news that's fit to print for the Aston West Universe (and any other pages you'd like to follow). Enjoy, and good reading!

Finished reading Kristine Kathryn Rusch's posts on pricing (parts 1 and 2) this morning, and decided to take a look at my own plan for pricing in light of that information. Certainly, I've been guilty of giving my books away for free, like I've been doing with Seeker for the last 6-7 months. But has that helped as much as I would have liked? Certainly, when I first started the giveaway, numbers were good (such as the 407 copies it gave away in the first month) and it seemed to boost up sales of my other titles. But as time went on, the number of free copies dwindled, and carry-over to the other titles shrank. So, perhaps there's something to the information that Rusch conveys in her posts...

One of the other bits from those posts is the idea of pricing your titles so low that people start wondering what's wrong with them (with the added bonus of not being differentiated from all the other low-priced material out there). I've done that same thing, all in the name of increasing sales. For example, I've been pricing my novels at $2.99 and anything shorter at $0.99. But honestly, it hasn't really helped all that terribly much (except for some reason, people flock to The Cure on Barnes and Noble when I drop the price to $0.99). So, perhaps there's something to be said for higher prices. Personally, I hate paying $6 or more for an e-book, but I've found that I still do it for a book that I want to read (I still don't find myself trying an author for that much without a recommendation or a really convincing sample). So, maybe everyone else out there is the same way, and I've been doing it wrong all this time.

So, taking Rusch's comments into consideration, I've decided to increase the prices on most of my work, to see if there's something to the "price means value" concept. For my novel-length work, I've increased the price to $2.99 for my entire backlist, and $5.99 for my newest novel. I still don't see anyone paying more than $0.99 for a three-pack of short stories, so I've kept the Triple-Shots where they were.

For the time being, I haven't updated the prices of my print books. I want to try out her statements about bookstores now being able to stock POD books first. If that's true, then I'll need to go out and pound the pavement this year. But feel free to try that out for my titles as well, the next time you're in a Barnes and Noble or independent bookstore.

And I'll check back in a few months to see whether this pricing change has made a difference or not.
Posted by T. M. Hunter at 11:22 AM No comments:

Email ThisBlogThis!Share to TwitterShare to FacebookShare to Pinterest
Labels: prices, self-publishing, writing as a business

Well, another week since I recapped my January goals, so here's the latest weekly recap:
1. Write 1,800 words on Resurrection - 0 words this week
2. Complete a first edit on Fallen - Completed
3. Format paperback version of Friends in Deed. - Completed

Next week, I'll recap my weekly goals and report my results.
Posted by T. M. Hunter at 8:41 PM No comments:

Well, another week since I recapped my January goals, so here's the latest weekly recap:
1. Generate a plot for a new short story - Completed
2. Write 2,000 words on Resurrection - Completed with 2,200 words
3. Complete a first edit on Fallen - In work, but not completed.

1. Write 1,800 words on Resurrection
2. Complete a first edit on Fallen
3. Format paperback version of Friends in Deed. (Adding this to my January goals)

Next week, I'll recap my weekly goals and report my results.
Posted by T. M. Hunter at 9:14 PM No comments:

Well, it's been a week since I set up my weekly and monthly goals for January, so time to recap the progress I made this week.
1. Complete the first draft of Fallen (estimated 4,000 words) - Completed, although it was closer  to 3,000 words.
2. Generate a plot for a new short story - Tried over several evenings to come up with something, but never had any luck. Not completed.
Progress toward my monthly goals for January:

1. Generate a plot for a new short story
2. Write 2,000 words on Resurrection
3. Complete a first edit on Fallen

Next week, I'll recap my weekly goals and report my results.
Posted by T. M. Hunter at 8:30 PM No comments:

Well, now that it's back-to-work time, it's also time to recap how I did against my plans for the break. To recap:

1. Complete the first draft of my new Aston novella Fallen. Completed!
2. Complete edits on my re-write of Friends in Deed. Completed!

Always good to meet my goals, and hoping I can keep that up for the rest of the year...

So, with my previous post, I set up the writing goals I aim to accomplish in 2014. Right after writing that post, I then read Dean Wesley Smith's post about how to be successful at your writing goals. Timely.

One of those suggestions was to report in to someone, whether you miss your goals or accomplish them. So, I've decided that I need to report it to you, my loyal fans, and to bring back my old habit of weekly goal-setting and reporting. In addition, I've decided that a set of monthly goals would also be good to do (since they'd end up being more "grand scheme" and would be easier to tie into the annual goals).

So, since we're on the first of the year, here are my goals for January:

And now for the weekly goals:

1. Complete the first draft of Fallen (estimated 4,000 words)
2. Generate a plot for a new short story

Next week, I'll recap my weekly goals (and of course, my monthly goals will be covered February 1) and report my results.

Here's to everyone setting their writing goals for 2014 and striving to accomplish them!
Posted by T. M. Hunter at 8:40 AM No comments: