Life's circumstances have been even worse this month than they were last month, but even so, I was able to get a lot of writing-related work completed this month. That included meeting my daily word count goal every day this past month (continuing the trend from July, not even counting another 9 days or so at the end of June). Here's how I did against my August goals:

And now, the goals for September:

Here's to everyone striving to accomplish their writing goals for 2014!
Posted by T. M. Hunter at 9:21 PM No comments: 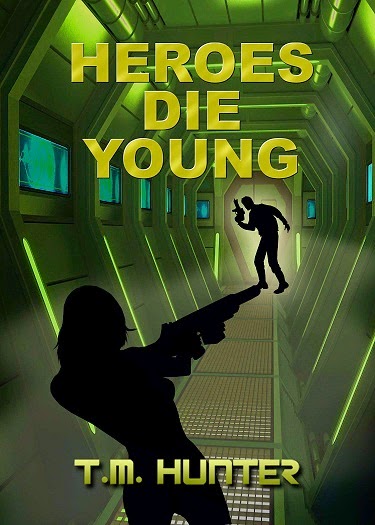 Hot off the presses for your Kindle-reading pleasure, here's the second edition of Heroes Die Young

Space pirate Aston West has come across derelict freighters many times before. But this latest catch, fresh out of a recent battle, proves to be a little more than he expected. He can’t fight the urge to pilfer a valuable cache of illegal contraband, but discovers one last stowaway who tries to kill Aston. Attack craft return to finish the ship off and Aston has no choice but to save her from certain destruction.

Who is she? What was this cargo he just took? Why was the freighter destroyed?

Surrounded by a host of old friends, new acquaintances, and desperate enemies, Aston travels from one system to another, getting the answers he wants, but revealing even more questions, and putting his life motto of never getting involved to the ultimate test. Climaxing in an ending for which even Aston is not prepared, the story will have you gasping for breath, and desperate to find out if heroes truly do die young.

Been far too long since I lasted posted a snippet for Science Fiction Fantasy Saturday. Life has been a little more than interesting lately, and hoping to get back in the swing of regular posts. In addition to all of the life circumstances, my contract with Champagne Books for Heroes Die Young has reached its end. So, I'll be bringing this one out on my own shortly (just working out final cover art tweaks with TK Toppin). An as such, I figured it's time to bring back an old excerpt from the reworked manuscript. So, for those who've already read it, enjoy the flash back down memory lane. And if not, enjoy!

I moved on to the other bays, going through the same process. As the third bay jettisoned, I heard a metallic clang echo farther down the hold.

I pulled out my Mark II and stood, as a woman with bronze skin and black hair jumped out from a crawlspace under the floor. She raised a disintegrator cannon and pointed it at me. I dropped to the floor just before her first shot hit the bridge door behind me and showered sparks down onto the floor grills. I fired a three-shot burst and she dropped down in the crawlspace again, while minimal damage was done to the aft bulkhead. At least it gave me the opportunity to run toward the bridge door, where the impact mark from her first shot still glowed. Eager for cover, I ducked into a small alcove at the front of the hold as another shot struck the wall. Sparks fell at my feet while I pressed my back firm against the cold hard metal. My heart beat faster than it had in quite a while.


And of course, as always, if you like what you see, pick up a copy of all of my other works through the links above.
Posted by T. M. Hunter at 9:00 PM No comments: