This was the first day where we weren’t scheduled to do anything until much later in the day. As such, it was up to us to find our own entertainment. Rather than try to get myself lost in the streets of Bangalore (having no sense of adventure myself), I hung out in various spots around the hotel. I hadn’t discovered that the hotel had a massage area, but at nearly fifty dollars for a sixty-minute session, I wasn’t all that eager to try it out. I went ahead and hung out by the pool area, where pigeons have (for most of our stay here) used the water as a drinking bowl. Fortunately, I’m not a swimmer, so didn’t have to share time with any feathered friends and whatever they may have been leaving behind. The breeze was exceptional when it was present, but most of the time there was none, and the high temperatures made it so that I headed back up to my room.


As I was setting up to get another hour of Internet time, housekeeping came to the door and asked about servicing my room. Since it needed to be, I grabbed my gear and came to a small lounge area to get a little writing and reading done. Asking for a Coke, they proceeded to bring me a Diet Coke (which was easily corrected after I asked). I’m not entirely sure why this is, but I had the same experience at work, where someone bringing me a drink did the same thing. Perhaps most Americans coming in ask for a diet drink? Or perhaps they’re trying to tell me something about my weight and physique? Either way, I wish they had more Pepsi in this hotel, since the previous day’s housekeeping service neglected to restock the lone Pepsi I’d used the day before…another reason to let them have at the room when they asked.

Air conditioning seems to be a luxury that most do not want to use too much of in this country. At work, we’ve noticed that they don’t turn it on until the official start time for most workers, 9 AM. It makes the first hour or so rather unbearable for the rest of us. I also notice that the restaurant and lounge area don’t seem to want to turn the temperature down too much either. This may in fact be their way to reduce the number of power outages, which they’d run into earlier in the week…or it may just be the fact that I’m a spoiled American. Haha.

Apparently, there are no consistent liquor laws here in Bangalore. When visiting the pub yesterday, I noticed that they considered minors (for which they would not serve alcohol) to be anyone under 21. In the lounge here at the hotel, they consider anyone under 18 as a minor. At the steakhouse we’ve grown a bit fond of, they even have minors serving alcohol (according to the server bringing the bottles out, he was 17). Rather odd thing.

Writing notes to the housekeeping staff is the key to incredible service. Another member of our group had mentioned the same thing. After not having my mini-fridge re-stocked with Pepsi the other day, and then having large bottles of water (which don’t fit in the fridge to make them cold) in the room, I wrote a note requesting Pepsi to be stocked along with smaller water bottles. I returned to my room to find the bed made up with flower petals all over it, three cans of Pepsi in the fridge and six small bottles of water scattered on every available table surface in the room. Far better than the Hard Rock, where I requested a second drink and twenty minutes went by before it finally showed up.

After some members of our Indian team showed up, we were off for a little more last-minute shopping. Picked up a few more scarves, and was introduced to the fine art of shopper’s negotiating. Actually ended up reducing one item by around 50% (and the total bill by just under that amount). Tricky, tricky.

Then, it was time to take a sampling of some of the mass transit options here in Bangalore. First up was the newly constructed Metro, the elevated train which runs between (currently) four stops. These are the reason for all of the massive construction delays through several areas of town, including on our way to work. It’s quite a modern system, and also very much a novelty for the local population, who were taking just as many pictures as we (as tourists) were. Unfortunately, with only four stops (at about 7-8 km from end to end), it’s still very much in a test setup. Although for 15 rupees (or about 35 cents or so), it’s also quite a bargain…and will be a fabulous addition to the city when they finally get the first phase completed sometime in 2014. 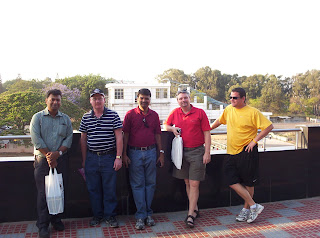 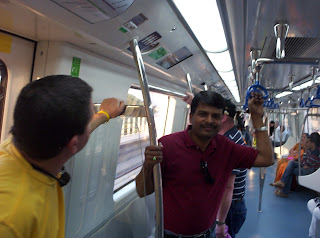 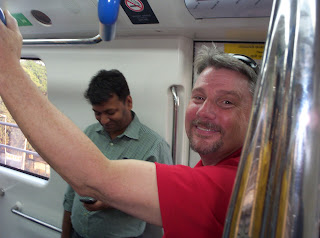 Next, one of our team wanted to try out the auto-rickshaws that we’ve been encountering this entire time (and that have been the bane of our existence in city traffic). Squeezing three grown adults into the back of one (we took two separate autos) was quite a bit of a trick, but we ended up getting it done. I also felt I reduced my life span by about five years with all of the exhaust fumes I inhaled. Definitely not my favorite method of transport.

Our next stop was a place called UB Square. I didn’t have enough zeroes trailing my salary to shop here, nor would I want to spend that sort of money on consumer goods such as clothing, watches and the like, but it was interesting to see the place. 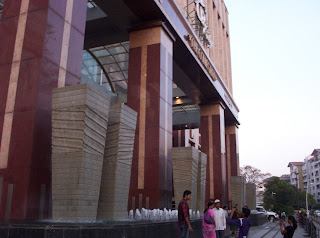 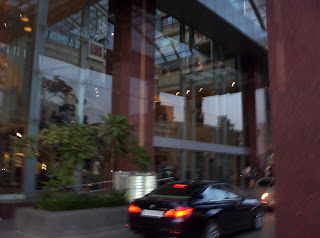 Then, it was back to a different set of autos for the return back to the hotel. This driver made things really exciting with all the weaving and jockeying for position (the first guy we had was far more tame in comparison), but the real excitement came when we arrived. Our Indian team lead and the driver began arguing for quite a while. After the exchange, we discovered that the driver was trying to extort 50 rupees (~1 dollar) for what should have been only 20 rupees (~50 cents). The trick (and I noticed this with our first driver as well) is that they turn off the meter for foreign riders, so they can do this to us. According to our team lead, they also have this knack for dropping riders off in the middle of nowhere and robbing them blind. Yes, definitely glad we have drivers…and can’t wait for the Metro to be completed.