Author's note: For the last several weeks, I've been posting tidbits of a travel log, which I kept during a two-week business trip (the reason I was in sporadic contact with the world recently). Hope you've enjoyed them, and now without further adieu, I present the final installment. Enjoy!

Based on advice from other previous travelers, we left our hotel way early, and arrived at the Bangalore (Bengaluru) airport  well over three hours ahead of schedule. Granted, we didn’t get to see what the line was like later, since we were already in the terminal then, but there was absolutely no line at the ticket counter, no line to speak of at immigration, nor any wait time at the security checkpoint (and I’m pretty sure the guy who was checking me over at security owes me dinner and a movie).

Having been up all day, going to work and then getting no naps before our flight, it was good that (despite what we first thought) they had a business lounge for us to rest in. Three hours in comfy leather chairs definitely beats sitting in plastic bucket seats. Free drinks and (what they tried to pass off as) snacks didn’t hurt either. Shortly after our wheels left the ground, and we left the orange lights of the Bangalore night life behind, I was sound asleep for about a three-or-four hour rest.

Waking up just as the break of dawn was slowly catching up to the plane was a very surreal experience. Lots of pretty colors in the wispy clouds below, and I only wish I’d snagged my camera from my carry-on…a fact I also wished for when we passed over the mountains of what used to be known as Yugoslavia (and I can’t for the life of me remember the names of countries born out of that split) and the sight of so many cities nestled into the terrain there. Sadly, by the time I was able to finish the breakfast meal supplied, and get to my camera, we were then over Germany which was layered with thick cloud cover. I anticipated a fairly rough arrival in Frankfurt.

Never before have my high school German courses been so utterly useful, though, until one of the stewardesses dropped a bucket of ice on the floor. When she muttered “Scheisse” just loud enough for me to hear, I smiled knowingly and had to hold back a little chuckle. Sadly, the joy only offset my disappointment earlier in the flight when I tried and failed to help the passenger beside me operate their armrest-mounted tray table. Even though I knew the button to press, it wouldn’t work for me either. A stewardess came by and worked it correctly in the blink of an eye. I’m going to go ahead and blame the jet lag.

Unfortunately, we were in a different terminal this time, and the lounge in this one was packed full and had a terrible selection of snacks and such. Guess I can count myself as one of the spoiled now. On top of that, the airplane didn’t even leave the gate until after the scheduled departure time. This would come into play a little later, for those keeping score at home. And to add insult to injury, I picked up a second IOU for dinner and a movie from the screener here in Germany as well…which was odd, because the first trip through Germany hadn’t netted this treatment. Maybe this one really liked me…

Met a nice woman from Greece on this leg of the flight…she was coming to Chicago (and took it upon herself to take my pronunciation of Chicago as the correct one, so…) for “pleasure” (versus business…get your minds out of the gutter, folks). She was also able to sleep for most of the flight, so I got a lot of reading done on a friend’s book, Ambasadora. I’ve discovered over these past couple of weeks that the writing on my own fiction has been virtually non-existent. When I did get writing done, it was utter and complete crap. 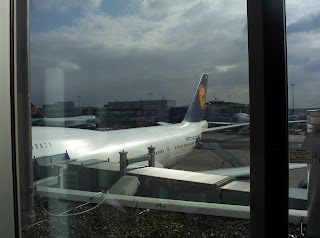 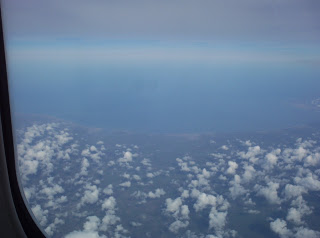 Immigration and customs was actually fairly smooth, compared to what I thought it would be, which was good since we only got in about 50 minutes before our next flight was scheduled to depart from a completely different terminal. Sadly, the ticket counter for American messed around too long with trying to figure out whether they should put us on that flight, or bump us to the next one, and then decided that they were under the cutoff for getting our bags on the first flight. So, there we sat for over three hours…and sadly, no business lounge on this final leg (since we were flying economy on this one).


A long two-hour flight in a small regional jet with three seats across two rows made things rather exciting (and bumpy) on the way home, and then we get back to find out our bags actually did make it back on the first flight…but only after waiting at the baggage claim for a good thirty minutes or so. So, after being up for nearly 51 hours, with only 3-4 hours of sleep to my name, it was finally time for me to head off for oh so pleasant slumber…and to bring this trip to a close.