Another day in Bangalore traffic is about the same as the rest, and off to work we went. Part of my duties while I’m over here is to provide a set of training modules for our team. Well, it started out as just my team. Then, on my first day back (Monday), I find out from my boss that his boss has asked that another group (in another area under the big boss’ purview) sit in on the training modules. The more, the merrier, I suppose.

Well, when I finally get in there (yesterday) to have the first class, it starts out okay, but then people start showing up. Turns out a third group decided they wanted to join as well. Without going into the nitty, gritty details, I really didn’t understand how the training I was giving even applied to this third group, but proceeded to carry on with the session. Lots of vacant stares in that group, but all in all, I thought it went pretty well. I noticed today, while giving the second training session, that the third group didn’t bother stopping by. Apparently, they must have realized what I had figured out the previous day.

I also discovered that the fabric I bought over the weekend CAN in fact be tailored into a Saree (Sari?) in Wichita, so one last crisis averted [Note from the author: It turned out the fabric was not actually long enough to fabricate the wrap and the blouse out of for my wife, so additional material has to be purchased here in the States for the latter]. And I realized that my stockpile of clothing was getting a bit low, so had to put some laundry through the system here. With the prices listed on the form, I have a feeling they know the captive audience they have here at the hotel, and are doing their best to be good little capitalists.

During the long drive back through traffic, I began wondering whether our driver had ever considered a career in Nascar or Formula One racing…

Today, I also discovered an extra vase full of many different flowers (I’m sure my allergies are going to love them), one step up from just the flower petals in the bathroom. Apparently, this is what happens when you tip the housekeeper. One of our other team members on the trip wrote thank you notes to the housekeeper and ended up with flower petals on his made-up bed. I warned him he might want to watch out, or he might end up with an extra guest accompanying him back the States…


The highlight of the day, however, was after work, when the group (and some of our Indian team members) took a trip to the Hard Rock Café in Bangalore, which happened to be just down the street a half-mile or so (although it seemed like a lot longer walk than that). I can’t even remember the last time I visited one of these places, but think it may have been in Orlando, during the summer of 1992. For those who don’t want to do the math in their head, that’s twenty years between visits. Was I really missing much? 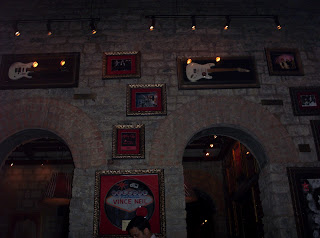 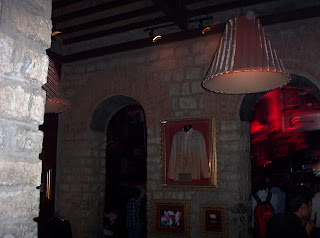 The building which housed the place was apparently an old library, built of huge stones. Overall it looked great. Unfortunately, we’d inadvertently come to the place on a special night, where they featured three live groups conducting a “battle of the bands” on a stage inside. It made it very difficult to converse with everyone at the table except for when the bands were changing out. Two of the bands seemed okay, although I couldn’t really understand whether they were covering songs or singing new material. The third band however, seemed to fancy itself a dark heavy metal band. Although I’m a fan of metal, this wasn’t really up my alley. The wait staff also seemed rather useless in bringing you refills and the food you ordered. I ended up having a “Legendary” burger, which was a great burger, but way too much food (definitely could have shared with someone). And of course, I ended up buying a few t-shirts (one for myself, the others for gifts).

Overall, I could have done without the live bands, or the lazy wait staff, but it was a good time…and since I likely wouldn’t get another chance to visit the place, it was a worthwhile trip (although we took a different route on the return to the hotel, which had us walking right over an open sewer line. Definitely not an exciting time…).