Another day at the office, complete with a trip through the city traffic. It still amazes me how many people are moving around the city at all hours of the day and night, though I imagine that’s what happens when you fit ten million people into one city. I’m also surprised that my allergies haven’t been far worse than they have been, with all the pollution from so many vehicles and all the dust and dirt tossed into the air all over from the massive construction projects. 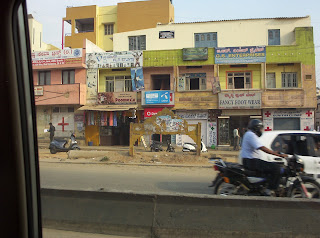 
The lack of infrastructure planning really makes one ponder how a country with this many people could survive for this long. An elevated train system (The Metro) is being constructed, but rather than the typical state of affairs back home, where detours are formulated and alternate routes are constructed, they simply start digging up the roads to put in what they need (in this case, the support pillars) and let the vehicles sort of wander wherever they can to get around the construction. It’s quite entertaining.


This evening, an ambulance came rushing along with us. With no room for any of the cars to pull over (even though no one was even trying when they could), it does make one think that emergency services would be a nightmare if any sort of mass disaster happened, where citizens would need large amounts of fire and rescue. You wouldn’t want to trust your life to this sort of response time, I don’t think.


Watching local news, and somewhat related to that topic, apparently there was a terror attack averted in Dehli today. This reminds me of the week or so leading up to this trip, where a bombing or two actually did happen there. Although one might be a bit frightened about the future here, I’d been told shortly after that earlier report that the distance from Bangalore to Dehli is about twice the distance from Wichita to Minneapolis. Though I didn’t confirm that information myself, my personal comfort level hasn’t been impacted all that much. I still feel extremely safe at the hotel and at the office (whose security is just as much), and the drives in between have a far greater risk of me ending up as a pancake from wayward vehicles. That said, if something were to happen, I figure I know where I’m going in the end, so why worry?
The rest of the team appears to have reached its fill of the Indian cuisine, ending up ordering pizza again for lunch. I have a feeling if they try to do so tomorrow, I may in fact have to venture back to the Indian cuisine. Love the pizza (and it’s definitely a very close copy of the ones back home), but having pizza day after day is going to have the same effect as having Indian food day after day.

Other exciting news, it was just announced that the CEO of our company’s conglomerate parent was going to be making a day visit to the local facility on Monday. What timing! It would be the first time I’ve ever seen him in person, I believe, and to think, I only had to travel halfway around the world to do it…haha.

The hotel has a dinner buffet on Wednesday nights (and Friday and Saturday, apparently), and tonight’s selection was an Oriental buffet. A welcome respite from both the Indian and the American cuisine both? Perhaps so. It was also equally entertaining with our group’s interaction with a waitress we’ve come to know here at the hotel named Meena (which means "eyes" in her native language...not "ice" as I confusingly thought she was saying the first few times...). She probably wonders if all Americans are as crazy as we are, we being her first experience with them (according to her...I have a feeling that may have just been a ruse to boost tips, haha). Tonight’s excursion was topped off by some in our group teaching her American slang, and then attempting to get her to teach them the same words in her native language. Fun times…

Oh, and I also introduced her to the wonder of a Nook e-reader…even got her reading from it, with the first few lines of The Cure. Guess I should have brought a paper copy along…ha. I almost had her reading from Chronicles in the NIV Bible (what came up first), but figured that might cross some cultural boundaries that didn't need crossing that soon...probably should have, anyway...oh well.