I had thought during the flights to Bangalore that the scanner system had reset the watch I’d bought for the trip (since I use my cell phone for the time back home), but apparently the watch (Wal-Mart $7 special) is defective. After thinking I’d only gotten three hours of sleep (ugh), and sitting around doing odds and ends stuff for an hour on the computer, I noticed that my netbook clock (still set on Wichita time) was hours off from my watch. Turning on the television, I saw that I’d actually gotten about six hours of sleep. Great news on the amount of rest front, but not so much on the fact that I needed to rush to get ready for my first day back to work since last Tuesday (having taken last Wednesday as a vacation day). So, rushing around to get ready, it was finally time to head off to the office. 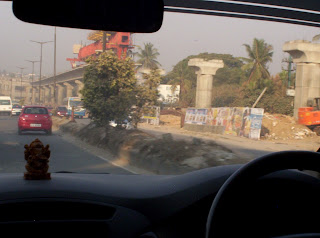 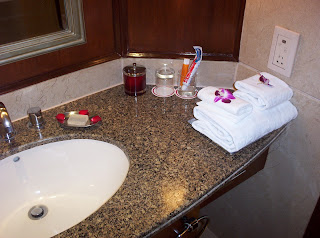 In an attempt to make me feel more at home (apparently), I suffered with IT issues most of the morning. Fortunately, I had brought along paper copies of a few items I needed to work on. Once those were resolved, the rest of the day was spent catching up on e-mails and working out items with our Indian team members. Lunch was taken on the rooftop with the rest of the companies in the building (split into divisions. Sadly, I have this feeling there was something included in that meal which caused a little stomach trouble for several of us. Pulled out the Pepto for a pre-emptive strike…(note that the picture above was taken pre-Pepto)

As expected, traffic was even more of a nightmare than before. I longed for the streets of Wichita, where a trip across town doesn’t take much more than a half-hour. I’m not sure how close (straight-line) our office is to the hotel, but it took twice as long for far less distance traveled. Unfortunately, even though we left the office around 5:30, by the time we got back and went down for dinner, it was already 9 o’ clock by the time we were back in our rooms. Even the flowers which the housekeeping staff laid around the bathroom did nothing to energize me (though I can’t say the same for my allergies). Exhaustion was creeping in, and it was time to call it a day, until the next one.