A Recap of the KDP Select Experience

I've watched several authors (and some publishers) join up with Amazon's KDP Select program, which basically requires the book to be exclusive to Amazon. The promise of shared revenue and free giveaways lures them in. I never really saw the benefit, considering nearly half of my sales come from Smashwords and its affiliates (B&N, Kobo, etc.).

But I'm always open to new methods and opportunities. Maybe it really was all that and a plate of cookies...maybe I was missing out on the pot of gold?

So, I decided to toss my latest Triple-Shot into the fray, to see what all the fuss was about.

One of the stated benefits of  the KDP Select program is that you get 5 days every quarter where you can give away free copies of your title. I chose the first weekend the book was available for two days, and then set up Labor Day weekend as the final three days.

So, now for the stats:

The first weekend, the US site gave away 181 copies of the book. I do know others who have far more fans who've given away several thousand copies in a giveaway. So, maybe I just need more fans (who doesn't?). I put together a little breakdown of the stats at random points (whenever I felt like going on and checking) during that weekend. I've never really understood the way in which the Amazon rankings are calculated, but I've offered those up as well, along with the genre ranking (where I was able to get up to the #35 spot in Sci-Fi) 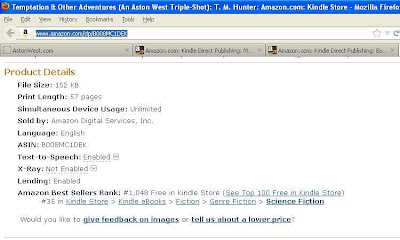 The giveaways are across all of the Amazon sites...for simplicity, I'll just do the totals for each, where a copy was given:

UK: 28 freebies, 1208 highest ranking (#53 in Sci-Fi...which ironically wasn't even in the same day as the highest ranking)
Germany: 8 freebies
Spain: 1 freebie
So,  not too bad...but giveaways don't make an author money by themselves. How many sales did it generate of this title after the giveaway? 2 copies (ironically, one person bought a copy before it went up for the giveaway)

Now, it's quite possible that this giveaway acted as a entry point for folks to discover more of my work. In the time period on Amazon following this giveaway (before the next one), I sold 2 copies of Death Brings Victory and 1 copy of Seeker, but no copies of The Cure nor of my other Triple-Shot. Ironically, my Smashwords (and affiliate) sales were 1, 1, 6, and 0, respectively (I don't have a line of sight on sales of my publisher's titles during this time period, so am ignoring those for the purposes of this discussion). So, even with a free giveaway on Amazon, it looks like I did just as well elsewhere, without the freebies.

So, Labor Day weekend...I didn't have as much time to check over my stats. Truth be told, I have a feeling that a holiday weekend probably wasn't the best choice for a giveaway, since readers (and potential buyers) likely had the same issue. But I offer these stats (since I didn't hit any genre-topping stats, just quantities and sales ranking).

So, not so good...and like I mentioned, it's possible that the holiday weekend cut down the amount of time I could devote to promoting, as well as removing potential readers from seeing the giveaway. It's also possible that all the readers who wanted to get a copy had done so during the first giveaway. But no matter the reasons for the low turnout, we'll go through the same exercise of sales stats (granted, this is only a week removed, so I may have to do a follow-up post later):


How many sales did it generate of this title after the second giveaway? 1 copy

For my other titles? In the past week, I've sold no copies of Death Brings Victory, 2 copies of Seeker, 1 copy of The Cure and 2 copies of my other Triple-Shot (this, even after I raised my prices near the end of August--another post for another time). Unfortunately, because of the delay in Smashwords reporting, I won't be able to put together numbers there just yet.

Still, I can't help but wonder whether these sales (since they're along the same lines as the first giveaway's) were just random, or if they were indeed driven by the giveaway. I did notice that at least one reviewer had posted something up on the latest Triple-Shot, and then proceeded to post reviews (verified purchases by Amazon) on DBV and HDY, so it's quite possible that the giveaways did have some effect on sales.

But is it worth it to set yourself up exclusive with Amazon? I'm still not convinced...which is why once my KDP Select contract is up at the middle of October, my book will be pulled from the program and sent off to the affiliate sites (though I'm contemplating the idea of going direct through B&N and Kobo...stay tuned). Sorry, Amazon, I just haven't seen the benefit to your program...
Posted by T. M. Hunter at 3:00 PM