For those who haven't already been following my Facebook fan page, my fourth "series" novel All Good Things is finished, and now available to pre-order for your Kindle. The release date for both the e-book and print version is slated for February 12. So, without further adieu, here's the cover and tagline/blurb from All Good Things: 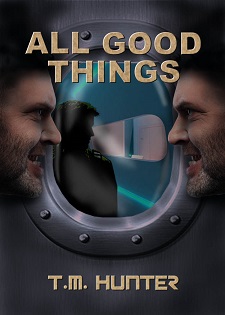 A new ship. A new love. A new life.
An old nemesis could end it all.

Space pirate Aston West never truly came to grips with the death of his friend, Leah Jordan. He’s tried to move on, falling in love with his best friend, Rione Sc’lari. But the memories of Leah’s murder at the hands of twin brothers Lars and Elijah Cassus still linger, gnawing at Aston’s soul as he blames himself for her death. Even though he exacted fatal vengeance on Lars, Elijah has promised revenge for his brother’s demise.

Elijah finally reveals himself, and Aston believes his life is over. But rather than carry out his prior threat, Elijah, possessing a new miracle drug, promises to bring Leah back to life if Aston goes along with his latest diabolical plan. Will Aston risk his newfound love and join forces with the ultimate evil, just to find absolution?