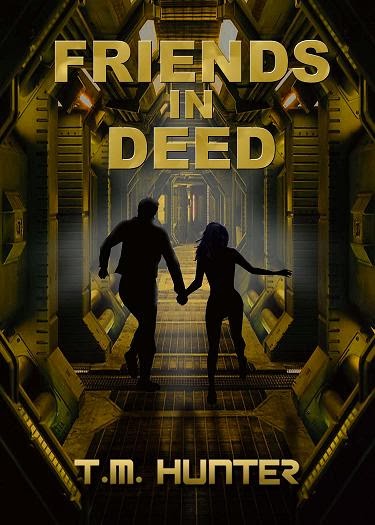 In the depth of my nightmares, Lycus IV would always be a formidable hell, no matter if the scenery gave off the illusion of mighty grandeur. Lush green trees lined the banks. Sporadic cloud cover offered broken views of a distant pale blue mountain range.

This prison planet’s terror was not found in its natural surroundings, but from its unwilling inhabitants.

A wide river flowed slowly before me over a bed of rocks. Filthy clothing, ripped and shredded, barely covered my bruised and bloody skin. I gazed across the clear, inviting water.

A bellow filled the air. I turned as a pale, naked giant rumbled through the brush, yelling at the top of his lungs. His makeshift mallet towered above his head, a boulder strapped into the fork of a tree branch. I jumped aside just before the weapon crashed down.

One of his eyes grew crazy-wide, while the other glazed over. Saliva dribbled from his lips. “I am King of the Wooded Realm! You dare invade my territory?”

This wasn’t a fight I planned to stick around for. This beast was obviously psychotic, and they were always the worst type of violent.

He hoisted his club and swung it. I stumbled back and it sent a breeze across my face. Escape was my only chance for survival, so I turned toward the opposite bank and sprinted across the riverbed.

“Your punishment is death! Vengeance is demanded!”

I high-stepped through the water while the beast screamed bloody murder. I didn’t want to look back, because that would leave no doubt he gained on me.

My foot tripped over a cluster of submerged rocks and I splashed into the cool, clear water. I flipped over and faced my attacker as his cold, dark shadow enveloped me. Milky-white foam oozed over his lower lip, dripping long strands toward the water below.

“Prepare to meet your maker!”

He raised the mallet high above his head. At least my death would be quick, but I couldn’t say much for painless. I shut my eyes tight and waited for the crushing blow.

A sharp whistle passed overhead and the giant beast gasped and choked. My eyes flashed open as the beast dropped his weapon into the river behind him.

Only one object stood between me and oblivion, a homemade arrow buried in his neck, with feathers fashioned into rear fins. He couldn’t pull it out from the front, so reached back. The beast’s mind finally gave up hope as soon as his fingers felt a stone tip emerging from the back of his neck. His eyes rolled up into his skull, then he fell backward.

The corpse splashed down and huge waves pushed against me. I jerked my head around and stared at the opposite bank. There, a bow in his left hand and a quiver of arrows strapped to his back, stood the man who’d just saved my life.

I shot awake, drenched in sweat and breathing heavy. The ship was rapidly decelerating, and something was definitely wrong. My ship’s computer usually gave me advance notice before we dropped below the hyperspeed threshold.

I wiped my forehead and tossed my legs over the cot’s side, speaking to my computer. “Jeanie, where are we?”

Her seductive voice was little comfort to me. “The Bacauri system.”

I involuntarily shuddered, even knowing we’d pass this way when we first set a course for the Tranon system. Quite likely, it was why I’d had a nightmare about my time on Lycus IV. Trouble was, we weren’t scheduled to make a stop before reaching Tranon. I scrambled for the bridge. “Why are we slowing down?”

This had never happened to me before. But as always, my life was a textbook example of bad timing.

“Once they cool down, continue course.”

I slumped into my captain’s chair, staring blankly at the viewscreen. A lone red planet, uninhabited, rested several megpars ahead, surrounded by tiny light specks.

I examined the sensor screen in my left side console, and confirmed I wasn’t just a victim of overactive paranoia. Sure enough, the Lycus system border was only two megpars off my port side.

I shivered. “Jeanie, how much longer?”

“Should only be a few more moments.”

I took a deep, calming breath. The prison planet Lycus IV had driven fear into my heart. My escape definitely hadn’t made me any friends with the territorial rulers, the Gohr. It had almost led to my death, more times than I wanted to remember.

Without warning, the viewscreen filled with bright white light. I held my hand up to shield my eyes.

Ships didn’t make unscheduled stops in the middle of nowhere, especially when there wasn’t a communication beacon anywhere nearby. It meant one thing.

Someone was after me.

“Put it through.” A window popped up along the left half of my viewscreen, and I was face-to-face with a Wasirian in a chair. The squat translucent beast stabilized the gigantic bulb, which served as both his upper torso and head, using several hundred short tentacles grasping onto every surface nearby. Black eyes were huge against his green skin.

Wasirians were a nasty species, known for their short tempers and violent tendencies. At least the males. I never knew anyone who’d actually ever met a female Wasirian. It made one wonder if there was a reason they were always so frustrated with the universe.

The beast’s tiny beak at the center of his body flapped rapidly. “Give me back my cargo!”

“Are you Aston West?”

One of his tentacles broke from the pack and jabbed at the screen. “Then give me back my Nomarian ale.”

His forked tongue flapped out from his beak and he hissed and shrieked, loud and shrill, to silence me, before going back to his demands. “You stole my cargo!” His giant bulb doubled in size and deepened to a red color.

I rushed to prevent another interruption. “I didn’t steal anything. What proof do you have?”

“An eyewitness saw you do it.”

“Then your eyewitness is a liar.”

His eyes narrowed to vertical slits. “Give it back or else!”

I muted the audio and spoke to Jeanie. “What’s his armament?”

Adilphi Interceptor Rockets. I could evade one, maybe two at the most. Four would be a stretch.

On the other half of my viewscreen, I watched his ship drift, pointed in roughly the same direction as I was. No more than half a kilpar long, the bullet-shaped front transitioned to a rectangular cabin, accented at the rear with four exhaust nozzles. Delta wings were nestled underneath his aft cabin.

His head grew a darker shade of red as I returned to the conversation. “Listen, I’m sorry you lost a shipment of Nomarian ale, but I don’t have it. Scan my hold for yourself.”

I didn’t even know what Nomarian ale looked like, but knew all my holds were empty.
His tongue flapped a few more times. “Everyone knows scans can be deceived!”

True enough, but I didn’t have his ale. I wished I did. Business had dried up lately, no pun intended.

“Maybe we can retrace your steps and figure this out.”

I had no idea why the idea of using diplomacy even entered my head. It wouldn’t have been any use with a Wasirian, even if I’d been good at it in the first place.

“You will not return my ale?” His eyes widened. “Then you will die!”

The sub-window disappeared from the viewscreen, which left me an expansive view of the starscape outside.

A skin panel rose along the top of his ship, just forward of the nozzles. His thrusters flashed and the vessel turned toward me. He was about to do something very stupid.

Jeanie confirmed it. “His rocket launchers are deployed and targeting is on-line.”

“Idiot.” I grabbed the control stick on my left and rested my other hand on the thruster control panel.

The ship banked and propelled itself in response as I jerked the stick forward and to the left, keeping him from getting a targeting lock. I kept his ship centered in my viewscreen.

“Can you hack into his computer and disable his targeting computer?”

“Negative. I have attempted to do so since he dropped out of hyperspace. He has a very impressive security system in place.”

“Guess we’ll have to do this the hard way. Bring up the proton cannons, continuous burst.”

“Disable his targeting computer. Maximum power.” The sooner I disabled his ability to kill me, the better.

I leveled my ship out. “Fire!”

Green beams pulsed from either side of the viewscreen and impaled his launcher.

Jeanie obeyed immediately, and the beams dissipated to nothing.

“I wanted to disable his targeting computer, not destroy his warheads.”

“His targeting computer is located inside his launch bay. It has been disabled as you requested.”

At least no further damage had been done.

Or so I thought, just before all four warheads glowed bright red and then exploded. Another blast followed when debris ripped into the engine pods, and the ship was shredded to pieces. A fireball ignited, then extinguished itself in the vacuum of space. Scrap metal raced away from the scene of the crime. Small fragments pelted my ship and I cringed. The last thing I needed was a hole in my hull. Emergency depressurization in the middle of nowhere would be yet one more nightmare I could live without.

As if there had been any doubt.

I closed my eyes. I hadn’t meant for the fool to die. Sure, he hadn’t been the first person I’d ever killed, but there was usually a reason someone had to die. Stupidity wasn’t one of the better ones.

Why hadn’t he just believed me? Now he was dead, because of lost cargo neither one of us had possession of. The truly sad part was neither of us had the ale.

“Wait for the debris field to clear. Then get us out of here.”

This brief interruption had given me a respite from my earlier fear. Without death staring me in the face, though, I returned to my thoughts of Lycus IV.

I closed my eyes and took another deep breath. As long as I stayed on this side of the border, I had nothing to worry about. The Gohr were notoriously mean and vicious, a fact to which anyone who’d heard of them could attest. They only left their territory to annex others, though, and for nothing else.

I opened my eyes once again. The sound of debris bouncing off the hull had ceased, yet we hadn’t moved. “Jeanie...”

“Forward coolant injectors are not responding.” Without coolant, the hyperspeed engines would turn my ship into a ball of liquid metal.

Definitely not anything to experience firsthand.

“Wonderful!” I leaned back and stared at the beige overhead liner, then rubbed my temples. “Can anything else go wrong?”

“I’m picking up a Gohr destroyer departing orbit around the planet.”

I double-checked the sensor screen. “What’s it doing outside of Gohr territory?”

I turned to the viewscreen. The destroyer rapidly approached and triple-barrel turrets atop the vessel emerged in exquisite detail. Twin stacks were mounted just forward of a raised bridge. One shot, and there wouldn’t even be debris left to sift through for my remains.

If they discovered who I was, and they would, my escape from Lycus IV would mean my death. My stomach churned with the knowledge my weapons and hull would be useless against a warship. There was no way I’d outrun them, either, not without operational hyperspeed engines.