Well, I neglected to put out a set of goals in 2021, and almost did the same here in 2022. I guess it's only a month late (not making excuses, but the past month or so has been a train wreck, health-wise). Here they are:

1. Complete the first draft of my fifth Aston West series novel, Before the Dawn. I have several chapters written on this one, so I am expecting to finish this goal. That said, I have been "pantsing" this story, which has not turned out that well for me so far (Some good material, but it seems to be wandering a lot with no real direction).

2. Complete the first draft of my second title (Tempted) in my new Demonkiller series. I do have a rough plot outlined for this one, so planning to flesh that out a bit more, and then start in on the draft. Stretch goal will be to get it published this year, but we shall see how things go the next few months.

3. As the rights from Dead or Alive have been returned to me, it's time to re-publish and re-brand my two short story collections. Planning to get that done this year as well. Perhaps in time for Air Cap in November.

Completely doable, so now it's just a matter of bearing down and getting on these goals.

Still didn't do much on this novel, but I have started to work on getting some momentum the past month, so hopefully I can get that rolling this next year.

I did actually complete this one, publishing my new novel Chosen around Halloween this past year. I have started on a general plot for book two, tentatively entitled Tempted.

Didn't write a single word on this novel this year, and likely will drop it from next year's goals, since I'll be focused on the other two novels mentioned above.

Didn't get anything more written on any Aston short stories. I may want to think about working some of these, to get back into Aston's world while trying to gain momentum on the next novel.

With recent national events, it seemed as good a time as any to dust off an old excerpt from my short story "Shell Games" for your perusal. Want to check out the full story? Catch it as part of the Dead or Alive collection from ResAliens Press!

The hatch slammed shut before I’d even finished, leaving me no choice besides pushing my way through the thickening crowd. Sadly, they had no manners and my legs ended up getting hit so many times I lost count.

Along the edge of the corridor, near the outer hull, a middle-aged man jumped atop a platform. “Ladies and gentlemen, I ask for but a few moments of your time.”

Many had come specifically for this show, or whatever it was. At least they seemed to, since everyone stopped right in place, making it tough for me to keep moving.

“Are you tired of scrounging for meals to eat, a bed to sleep in, a job to find and keep?” Heads in the crowd nodded, while some in the audience verbalized their agreement. It only bolstered the speaker’s rhetoric. “Well, I have a proposal which will give you all three in one!”

His comments stank as if they’d come from a used starship salesman and made me scramble for the exit. “Sign up now, and you’ll never have to worry about any of that ever again.”

The crowd erupted. I turned and watched him yank an electronic pad from his belt as several drew closer to the elevated stage. They lined up to stamp their thumbprint on whatever he was offering. Then the deal-maker directed them toward a corridor where I presumed his ship was docked. Every single one of them sprinted off toward the paradise presented.

I shook my head and continued on my way. Some people were just naive. These types of offers weren’t made out of the goodness of one’s heart.

My eyes went wide, but I kept moving. I knew better, but wanted to assume the slimeball wasn’t addressing me.

Now past the outskirts of the main crowd, I picked up my pace. Before I made it through the emergency bulkhead hatch, a bald, muscle-clad enforcer blocked my escape.

“I’m leaving.” It wasn’t a request for permission, but a statement of fact. I only wished I’d broken the rules, both the station’s and my own, and had my Mark II blaster on me. From the look on this beast’s face, it didn’t look like this behemoth and I were going to be getting along all too well.

His bronzed face sneered as he grumbled. “You’re staying.”

“If you think so...” I continued forward, but he shoved me back. Anger boiled up through my body, tempered only slightly by the tinges of pain running through my leg.

“Local ordinance says you have to stand here and listen until he’s finished.”

I narrowed my eyes, but the confidence on his face told me it wasn’t deception. And it always amazed me how people wondered why I despised politicians.

I turned and stared down the leader of this mess with a growl. “I suppose there’s a law that says I have to?”

“You catch on fast.” The enforcer put his meaty paw on my arm, and I jerked away. Hobbling up toward the leader of this sideshow didn’t stop the beast from following every step I took.

Well, as you can imagine, 2020 was pretty dismal all around, and writing goals were no exception. I did end up getting a lot of final edits finished on my Demonkiller novel just today, so here's hoping that I can keep the momentum going into the new year. Here's the recap for how things went against my 2020 goals. A follow-up post for my 2021 goals will be coming soon.

Didn't even finish a first draft of this novel, and unfortunately didn't touch this novel at all in 2020.

Getting closer on this one, but about 2/3 of the way through the final edits. Will then send it out for beta feedback.

Didn't get anything more written on any Aston short stories. However, I did end up publishing a collection of Kasey Reynolds short stories, so it wasn't a completely blowout this year.

Sorry for the long delay in posting...this year has been a bit of a mess.

Although most of you know me through my Aston West novels and novellas (through other threads around here), and the short stories I have in a couple of collections, I do write other material. Finished up another collection of stories recently, set in the same universe, but focused on a different character who made an appearance in "Entrapment" (one of my Aston stories).

So, head on by and check out my first Kasey Reynolds action pack. Blurb below:

Kasey Reynolds was one of the universe's premiere fugitive apprehension agents. After a particularly troubling failure on what should have been an easy job, Kasey's life and career begin spiraling out of control as she tries to find more work and discover more about what makes her who she is. Follow along on this series of five adventures featuring Kasey as she learns more about herself than she may be willing to admit. 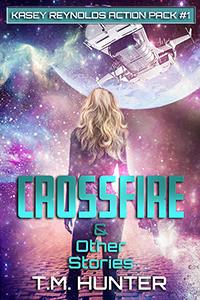 Well, since 2019 was such a dismal outing on the writing front, this year's goals are going to look a lot like last year's. Here's hoping I'll be able to complete a few of these goals this time around.

3. Complete the first draft of my in-work sci-fi suspense/mystery novel.

4. Write two more Aston West short stories and publish another triple-shot (my most recent one featuring Sweet Embrace came out back in 2015).
Posted by T. M. Hunter at 8:42 AM No comments:

Well, the year is coming to a close today, and sadly, this year has been pretty disastrous. Several factors contributed to that, I imagine, but those just happen to be excuses for not reaching my goals. So, for now, we'll recap how things went against my 2019 goals. A follow-up post for my 2020 goals will be coming soon.

1. Publish my fifth Aston West series novel, Before the Dawn. I plan to complete a first draft by the end of May, so that I can work on edits and hopefully have it out to the public sometime by the end of the year. I have some momentum going on this one, so hopefully things will move according to plan.

Didn't finish my first draft by the end of May (or anytime this year), so didn't get the new novel published.

2. Publish my in-work "Demonkiller" WIP (which still needs a title). I would like to need to try and finish my edits by the end of March, so that I can get beta comments back in June, and then hopefully have this available by November in time for Air Cap Comic Con. This might be a bit sporty, considering how rough the first draft was.

Still only about halfway through my first round of edits on this one.

3. Complete the first draft of my in-work sci-fi suspense/mystery novel. I anticipate this being finished before the end of December at the earliest.

4. Write three Aston West short stories. I would like to finish these by the end of the year, and hopefully I can get back on track with my triple-shots (my most recent one featuring Sweet Embrace came out back in 2015). I used to be able to write these fairly quickly, and have gotten out of practice. So, here's hoping that I can get back in the groove.

Did complete the first draft of one of these stories, and started on a second.

So, as I alluded to, it was a pretty dismal year. Here's hoping this next year works out better.
Posted by T. M. Hunter at 7:54 AM No comments: