Welcome back, everyone, to another week of Science Fiction Fantasy Saturday.

I've now sent my next Aston West "series" novel, All Good Things off to its beta readers.

As mentioned in prior weeks, my new Aston short story collection Dirty Dozen is available over at Amazon, I figured I'd continue on with my snippets from the last several weeks. 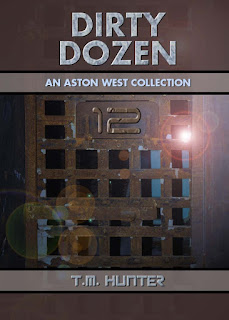 So, here's the next snippet, from my short story "Inoculation":


Jeanie became what I would have considered irate, if she had the ability for emotions. Given everything that had just transpired, maybe that wasn’t beyond the realm of possibilities. “Step away from the panel, or I will eject you into outer space.” To try and prove her point, she opened the doorway back into my living area.

I looked out the doorway, and smiled. It became obvious she wasn’t her usual self because she wasn’t thinking clearly. I would have laughed if the circumstances had been different. “But, Jeanie, how are you going to eject anything when you already depressurized the ship?”

Leaving her with that realization, I slammed the power switch down. All of the lights on the panel slowly extinguished as all of the main power in the ship, including that which supported Jeanie, went dormant. The emergency lights, on their own system, still functioned. I stood and stepped back through the living area and up to the cockpit.

If I didn’t miss my guess, the complete power shutdown would have set off the emergency beacon automatically. And although it had been a while since I had to use my own beacon, I remembered it had a higher power transmitter than our standard communications array. Hopefully it would be enough to reach that communications beacon nearby, because otherwise, I only had the air I was breathing through the suit, from its tanks and its re-circulators, and that would be it for me as well as Jeanie.